The Himalayas are the greatest mountain range on Earth, but these peaks are not just a magnificent spectacle. They are also regarded as “Water towers of Asia”. The Himalayas are critical for supplying water for around two billion people who live downstream, and available water is highly sensitive to climate change. The role of the groundwater system in sustaining the northern Himalayan rivers remains unknown, and this compromises Asia's future water sustainability.

Recently, Professor Chunmiao Zheng’s research team from the Southern University of Science and Technology (SUSTech), discovered the role of groundwater flow in “Asian water tower” areas. They published their results in collaboration with top research institutions in China and internationally, including Xi’an Jiaotong University (XJTU), The University of Texas at Austin (UT Austin), Seoul National University (SNU), and the Institute of Tibetan Plateau Research (ITP), Chinese Academy of Science (CAS). Their research, entitled “Role of Groundwater in Sustaining Northern Himalayan Rivers”, was published in the high-impact journal Geophysical Research Letters. Their study models the spatial groundwater flow and discharge volume to the Yarlung Zangbo, the largest river of the Himalayas in China, based on long-term climate and streamflow observations. The research group of Professor Zheng quantifies the spatiotemporal contribution of groundwater to river flows in the Yarlung Zangbo Basin (upper reaches of Brahmaputra). Their results show that the groundwater recharge represents around 23% of mean annual precipitation, translating into around 30 km3/yr of baseflow, which contributes to around 55% of the total river discharge in the upstream reaches and 27% in the downstream reaches. The percentage of groundwater contribution is inversely related to topographic steepness and total precipitation, with the steepest topography and highest precipitation in the eastern Himalayas. This study fills a knowledge gap on subsurface flow processes in the northern Himalayas and provides a baseline for comparing changes in the stream flow under climatic warming over vulnerable water tower regions. 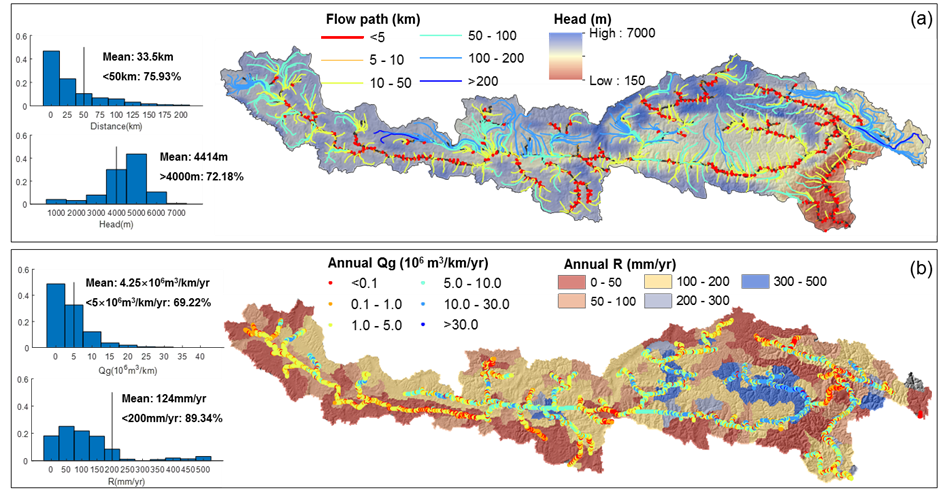 Figure 1. Spatial distribution of groundwater flow. (a) Simulated groundwater flow paths and heads; the color of the lines represents the distance of the flow path from source to sink area, and the frequency histograms of the distance of flow path and head are showed on the left side. (b) Simulated average annual groundwater discharge volume (Qg) in the form of baseflow along streams per kilometer and groundwater recharge (R) per unit basin area, and the frequency histograms of Qg and R are shown on the left side.

The groundwater flow patterns and recharge-discharge mechanisms within the aquifers of the northern Himalayans are poorly known, which limits understanding of the hydrological cycle and predictions of future changes in the sensitive “water tower” mountainous regions. A three-dimensional, physically-based regional-scale groundwater model was developed for the Yarlung Zangbo basin in the northern Himalayan mountainous region. Major study findings include that the short (<5 km) and intermediate (10–50 km) distance flow paths account for over 75% and dominate spatial flow patterns for the groundwater system of the northern Himalayans in China. It’s estimated that 124 mm/yr, around 23% of mean precipitation, recharges to groundwater, and this translates into about 30 km3/yr of baseflow.

The Northern Himalayan groundwater system contributes 27%-55% of annual river discharge from west upstream to east downstream. The percentage of groundwater contribution to river discharge is inversely related to the steepness of the topography and precipitation, with the steepest topography and highest annual precipitation in the downstream reaches. These results also indicate that the groundwater recharge and discharge would increase with the projected increasing ratio of recharge to precipitation, and thawing permafrost would increase groundwater recharge and discharge. Their evaluation fills a knowledge gap in one of the most complex alpine groundwater systems and provides a baseline for extending geoscience and socio-economic studies in high mountainous regions. 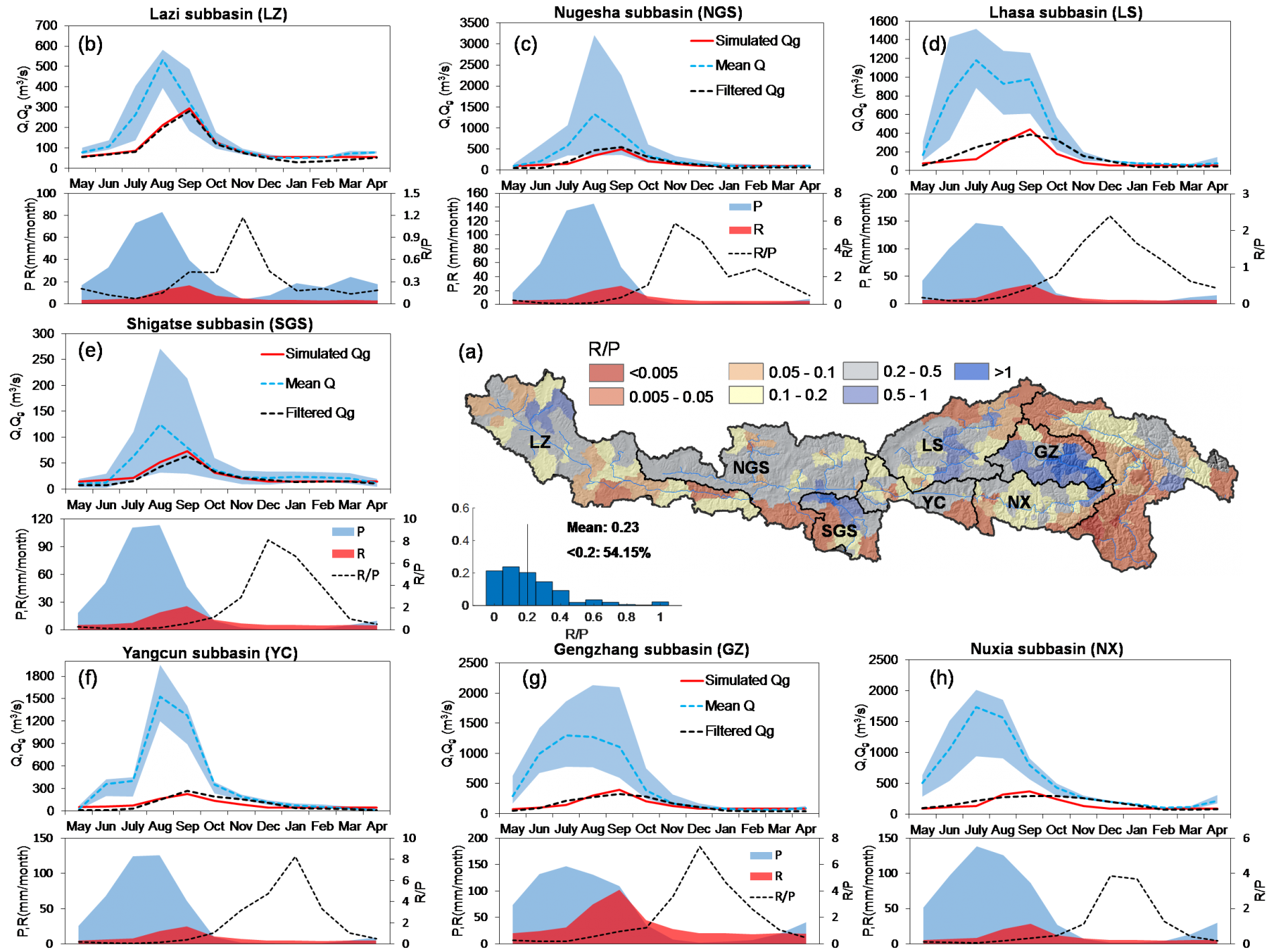 Figure 2. Seasonal groundwater recharge and discharge. (a) Spatial distribution of annual average ratio between recharge and precipitation. (b to h) Seasonal changes of observed river discharge (Q), groundwater discharge (Qg), precipitation (P), and groundwater recharge (R) for each sub basin. In top subfigures, the monthly averaged Q and ranges of Q are shown in dotted blue lines and transparent blue areas, respectively, and the computed Qg by digital filter algorithms and the Qg simulated by three-dimensional numerical groundwater model are shown in dotted black lines and red lines, respectively. In the bottom subfigures, the monthly average P and R are shown in transparent blue areas and red areas, and the R/P is shown in dotted black lines.

Yingying Yao, an Associate Professor at XJTU is the first author of this paper. Professor Chunmiao Zheng of the School of Environmental Science and Engineering at SUSTech is the corresponding author. This work was supported by the National Natural Science Foundation of China (NSFC) and the Shenzhen Municipal Science, Technology and Innovation Committee.