Li Siguang (October 26, 1889-April 29, 1971) was one of the most distinguished geologists in China. He is well known for his work in the theory of plate dynamics and understanding how continents and oceans move around the planet. He was also a pioneer in predicting earthquakes and discovered much of China’s oil and gas reserves.

He studied abroad at the University of Birmingham (UoB) in 1913 and received a master’s degree in 1919. In memory of his work, the China Institute at UoB established the Li Siguang Distinguished Lecture. 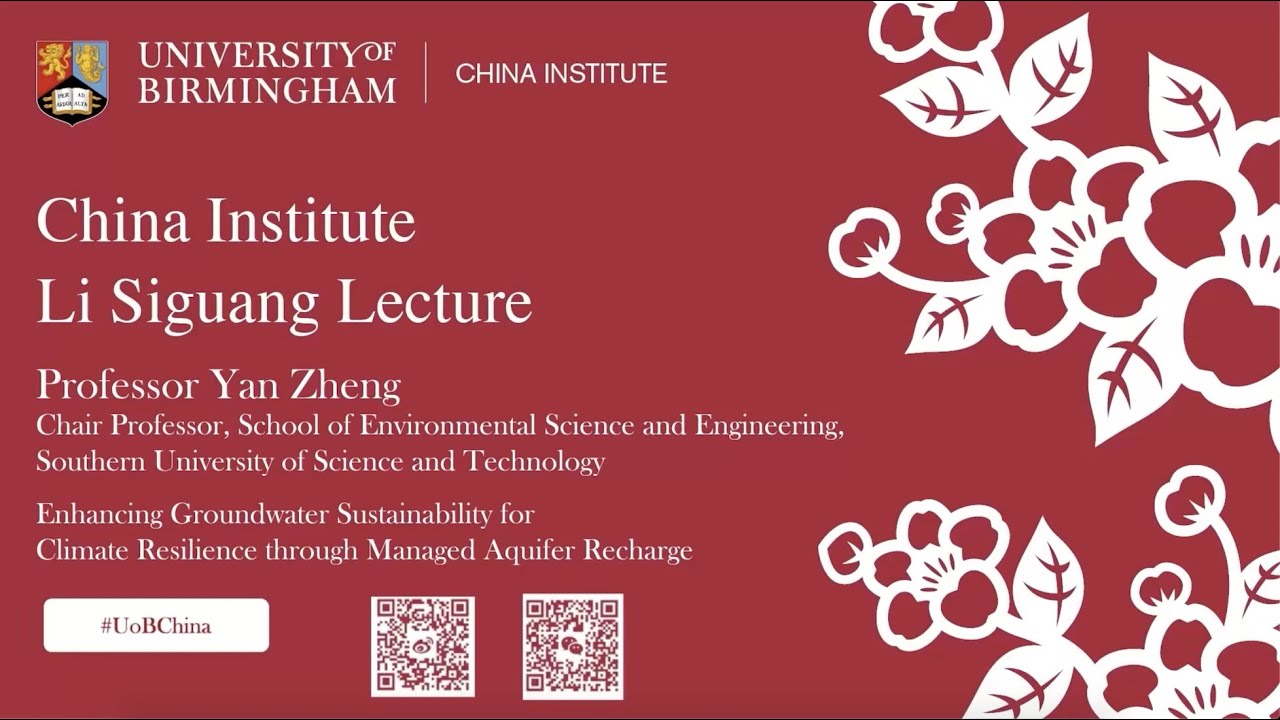 On October 28, Chair Professor Yan Zheng from the Southern University of Science and Technology (SUSTech) was invited to deliver the Institute’s annual Li Siguang Distinguished Lecture for 2021 and discuss in-depth groundwater sustainability and its role in adapting to climate change.

Groundwater is invisible, so it is easily forgotten. Although scientists have become alarmed by overexploitation and pollution of this precious resource, the public, in general, is not aware that groundwater is key to society’s water supply and food security. Furthermore, groundwater supports adaptation and builds resilience to climate change.

The lecture, entitled “Enhancing Groundwater Sustainability for Climate Resilience,” described the role of the MAR technology system in the integrated management of surface water and groundwater resources with resilience to climate change.

After the lecture, a panel discussion was held involving Professor Zheng and chaired by Iseult Lynch, Professor of Environmental Nanosciences at UoB. Other guests to the panel included Stefan Krause, Professor of Ecohydrology and Biogeochemistry at UoB; Dr. Shirley Ye, Lecturer in Asian History at UoB; and Dr. Mike Jones of Water Resources Modelling Lead at Thames Water.

Professor Jon Frampton, Director of UoB’s China Institute, said, “On the eve of world leaders gathering at COP26 in Glasgow to discuss the environmental challenges facing our planet, we’re looking forward to hearing Professor Zheng’s exploration of the important role that groundwater can play in securing precious water supplies.”

Professor Yan Zheng is a global expert in the geochemistry of hydrosphere studies and has published extensively on drinking water safety, environmental health, and sustainable development. Professor Zheng is from the School of Environmental Science and Engineering (ESE) at SUSTech. She was elected as a Fellow of the Geological Society of America in 2010 and a Fellow of the American Geophysical Union (AGU) in 2021.

To watch the lecture in full, please follow the link below: